Every electronic device is made up of three parts: hardware, software, and firmware. While the first two are more well-known, it is the firmware that connects the hardware to the software. Klipper is one such 3D printer firmware setup that uses Raspberry Pi to work alongside your 3D printer's mainboard. Klipper firmware is relatively new, and we intend to explain what it is and why you need it.

What is Klipper 3D printer firmware?​

But did you know there are several alternatives to Marlin? Yes, there are, and the Klipper 3D printer firmware is one such option that is becoming increasingly popular due to the benefits it provides.

Klipper is an open-source 3D printer firmware developed by Kevin O'Connor, the original author and current maintainer of Klipper. It allows interaction between your 3D printer hardware, such as motors and sensors, and software, such as slicers, in order to understand the gcode commands used to 3D print an object.

It differs from traditional 3D printer firmware, which runs on a single mainboard. Klipper is designed to work with a 3D printer mainboard and a single-board computer, such as a Raspberry Pi to eliminate the issues of low computing power. Klipper works in tandem with the Raspberry Pi and uses the extra computing power to assist the mainboard in processing commands, allowing you to print more quickly and precisely.

The firmware is the unsung hero of any device and is critical to the system. The firmware dictates how efficient the system will run. So, even if you have a strong hardware and superior software, a sub-standard firmware can hamper the performance of the system.

Similarly, the firmware in your 3D printer will determine how well your entire system performs, influencing its operational efficiency. However, we are not pushing you to consider switching to the new firmware. We are just highlighting the trend and how more and more users are now turning to Klipper.

Klipper's popularity has grown rapidly, and the vast majority of Klipper users have reported numerous benefits. We share them for you below:

Klipper has demonstrated the ability to take old hardware and make it run much faster. For example, an old 8-bit RAM support that can only perform 10,000 steps using a Marlin firmware is reported to run over a hundred thousand steps per second when using Klipper as its firmware. And for modern 32-bit systems like SKRS and Duet 2s, you can get up to 600,000 steps per second. Isn't this awesome?

The majority of users have reported improved print quality. It can be attributed to a variety of factors that Klipper influences. For starters, because Klipper makes use of extra computing power and built-in algorithms, it can precisely control stepper motors to the tune of 25 microseconds or less. This means that the printhead movements are smooth, reducing vibrations (vibrations are a common occurrence in Marlin-based printers) thereby improving the print quality.

Klipper also supports "Smooth Pressure Advance," a mechanism to account for the effects of pressure within an extruder. This reduces extruder "ooze" and improves print corner quality.

Klipper firmware makes use of additional computing power from the Raspberry Pi, allowing the 3D printer to divide work between the two boards. This means that the computing power of the Pi is used to process the gcode commands, while your 3D printer only needs to carry them out. This enables the hardware to perform more actions in a given amount of time, resulting in faster printing.

We agree that the benefits may not be obvious for smaller prints, but users certainly notice them for larger and longer prints.

You've probably figured out that having more computing power allows for better control of stepper motor movements and faster execution of print commands. This also has an impact on the print precision. The smaller, vibration-free movements improve the dimensional accuracy of your parts. 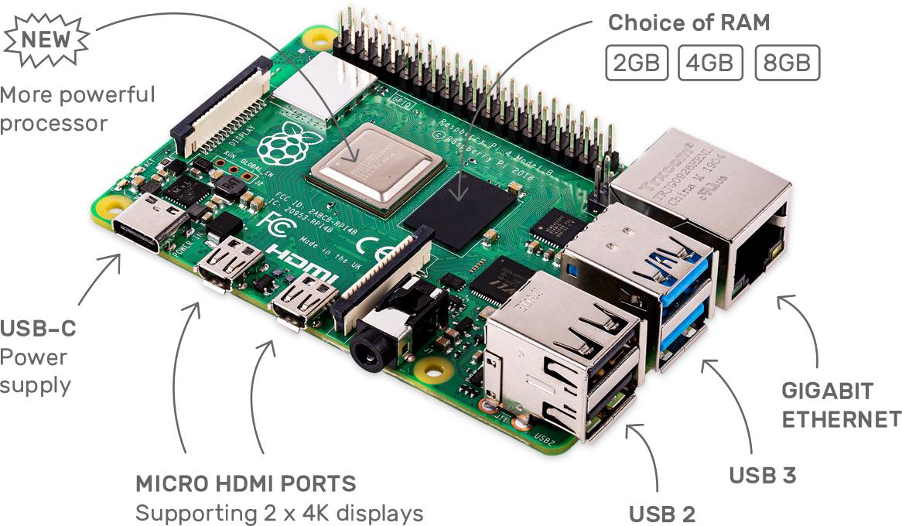 With this dual board system, the 3D printer can fully utilize the capabilities of both boards. This dual processing capacity is greater than that of most 32-bit 3D printer controller boards.

Klipper has web interface capabilities for setting up and configuring it via OctoPrint or its standalone web interfaces such as Fluidd or Mainsail (more on this later).

Below we talk about some of the great features of the Klipper Firmware:

Precise stepper movements: Klipper uses a Raspberry Pi to process all of the stepper motor calculations and determine when to step each stepper motor. The mainboard then only executes the commands. In contrast to kinematic estimations used in other firmware, the software calculates precise step times based on acceleration and machine kinematics. This allows each stepper motor event to be controlled with a precision of 25 microseconds or better.

Input Shaping: Klipper supports "Input Shaping," which reduces the impact of vibrations on print quality. This reduces or eliminates "ringing" in prints, allowing for faster printing while maintaining high quality.

Other additional features include:

Is Klipper compatible with your 3D printer​

Klipper is a versatile firmware that works with the majority of 3D printers. Cartesian, delta, CoreXY, CoreXZ, hybrid-CoreXY, hybrid-CoreXZ, rotary delta, polar, and cable winch printers are all supported.

Because Klipper cannot be installed on top of existing firmware, you must completely replace the existing firmware with the Klipper firmware. Klipper can be installed on most devices that run Linux (or a similar operating system). So, depending on your preferences, you can use a Raspberry Pi (the most popular choice among users), an Orange Pi, a Beaglebone, or even a desktop computer. If you choose a compatible device, it should work with almost any 3D printer on the market.

If you are new to the Klipper firmware ecosystem, you may be unfamiliar with Mainsail and Fluidd. Both of these applications are open-source web interfaces created specifically for Klipper. While you can continue to use OctoPrint, Mainsail and Fluidd provide some incredible features that OctoPrint does not.

Mainsail is an open-source, lightweight and responsive web user interface for Klipper built on an intuitive and consistent design philosophy.

We've included a quick table to help you understand the differences between these two web interfaces and how they perform against seven parameters.

As previously stated, the Klipper firmware can be controlled via OctoPrint, which is useful for local networks but has limited Klipper functionality. To get more features and functionality, you can use the Mainsail or Fluidd web interfaces. However, these, too, are only suitable for local networks. If you are looking for a solution wherein you are able to control your 3D printer from anywhere then you will need an additional solution.

Setting up Obico for Klipper​

Setting up Obico for Klipper is simple if you follow the steps we've outlined. But before we begin, you must ensure the following:

Klipper firmware is a rapidly growing alternative to the incumbent and widely used Marlin firmware. Klipper is not a simple replacement, but a feature-rich program capable of delivering unprecedented benefits to get the most out of your 3D printer. It will help you improve print quality, precision, and speed regardless of whether you have an entry-level or an older 3D printer.

However, to improve your 3D printing experience and make your 3D printer smarter, we recommend using Klipper in conjunction with Obico. The combination of Obico and Klipper will produce unrivaled results while allowing remote access, monitoring, and control of your 3D printer from anywhere in the world and using any device such as a computer, tablet, or smartphone.