Here at The Spaghetti Detective we are in the unique position where we have watched a lot of 3D prints on a wide variety of different 3D printers. A question we get asked frequently is “what is the best 3D printer?” While generally we try to stay agnostic to the type of printer, and catch print failures on any setup, for this series we wanted to try to provide an unbiased, data driven 3D printer review.

By publishing these statistics we hope to give everyone a better insight into the current state of the 3D printing industry and a look at some statistics of the best 3D printers at scale. The statistics generated below are aggregated from a sample size of over 1,000 unique 3D printers, over 100,000 unique print attempts, and over 10,000,000 hours of 3D print monitoring. If there are other metrics you’d like to see computed on some of the best 3D printers let us know in the comments below and we’ll try to include them in future 3D printer reviews.

Right now, the best 3d printer by popularity has a clear winner: Creality. Of our 1,114 unique printers providing type metadata at the time of writing this article, approximately half (45%) are all Creality. This is largely due to their wildly popular and affordable new Ender 3 series. The Ender 3 alone makes up around 35% of the 3D printers. The next most popular brand is Prusa. Their printers make up 11%, with 9% being their very popular Prusa i3 MK3 model. Following these two leading brands were Anycubic, Anet, Ultimaker, and LulzBot all with 2% or lower market share.

We find this metric especially noteworthy because of the economies of scale. 3D printers are still devices that need a lot of maintenance and upkeep. As a manufacturer or printer becomes more ubiquitous, the price of replacement parts or upgrades comes down. Additionally the availability resources and guides for that specific printer become more widespread.

Our technique for identifying the type of printer uses the M115 gcode command. This approach is not perfect and leaves quite a few printers that cannot have their manufacturer or model type identified, potentially due to modified firmware or main boards. For this reason our numbers don’t add up to 100% at this time to reflect the printers that could not be identified. We hope to improve this analysis in the future to have a more comprehensive breakdown of printer type for the remaining unidentified 38%.

Overall what we find the most interesting here is that there does not seem to be any correlation between the 3D printer price and the most reliable 3D printer. The top printers by failure rate were the LulzBot and Anet printers and the worst was the high end Ultimaker, however for the printers (such as these) with less than 2% of our user base, we don’t find there to be enough data points for the metrics to be very meaningful. If we limit to just Prusa vs Creality, the more affordable Creality printers have a higher reliability (failing 7.8% of the time) than the higher end Prusa line (failing 9.4% of the time), albeit we still don’t have enough data for this small of a difference to be statistically significant. Overall our conclusion from these numbers is that most of the best 3D printers have reached a similar point in terms of reliability and failure rate and other criteria may be a better differentiating point.

To calculate the failure rate we started with the following metric:

There are two main caveats we identified in this metric: 1) it is possible for a print to “fail” and the printer to still continue to the end of the gcode sequence thinking that it finished successfully and 2) a user may cancel a print for a reason completely unrelated to the print failing.

For the first caveat, we are uniquely positioned to report more accurate numbers given all of the prints on our system are being monitored by our AI system for failure detection. If our AI model detects a failure the user is notified and can either confirm the failure, cancelling the print, or dismiss the alert, resuming the print. As a result we have a multi-layer system using both AI and user feedback to catch failures, resulting in less skewed metrics, albeit some failures do still slip by.

For the second caveat, our intuition was that users generally try to monitor their print for the first few layers to make sure everything is going smoothly. If they realize they made a mistake (e.g. printing the wrong model, forgetting supports, etc) they will likely realize this mistake quickly and cancel the print early on. People have a high intrinsic motivation to catch these mistakes early as failing to do so will cost them wasted time and filament. We started by plotting the cancellation rate versus minimum print time. This plot, shown below, does seem to show a dramatic decrease in cancellations over time. 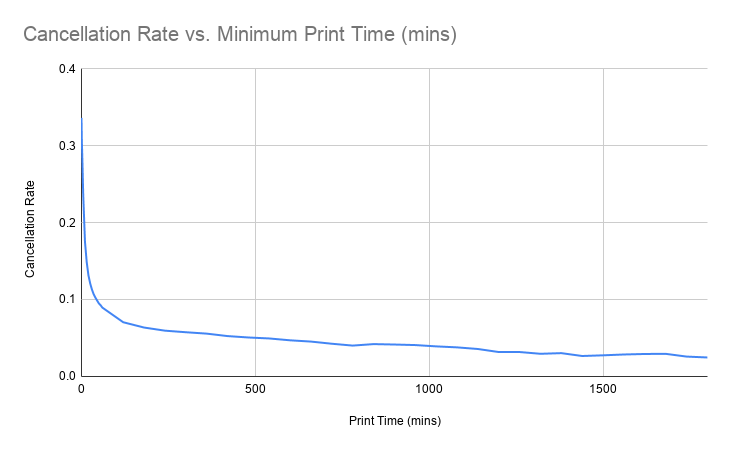 While it is highly likely that many of these early cancellations may also be caused by bed adhesion issues, which would be interesting to compare between the best 3D printers, we found it would be too hard to disentangle the user caused failures from printer caused failures. To mitigate this issue we dropped all prints that didn’t make it to at least one hour in duration. This brings the average cancellation rate for all printers down from 33.6% to 8.9%. We speculate that for prints that have been running for at least one hour, a user is much more likely to only cancel when there is a genuine failure, and as a result only report on these numbers to provide better relative metrics.

We leave further breakdowns and analysis on bed adhesion issues between the best 3D printers to a future 3D printer review.

The final criteria we are using for comparing the best 3D printers is the price. One limitation of our comparison method is that many of the printers only report the manufacturer in their metadata and not the exact model. We therefore did most of our comparison between manufacturers and will quote the price ranges for them below.

Today the best 3D desktop printers have an extremely wide price range. The more affordable ones are around $200 and the more expensive ones can be as much as 30 times more at around $6,000. Given this disparity we are quite surprised we don’t see a wider gap in average print reliability. For the two best 3D printers by popularity, Prusa vs Creality, we dug in further and confirmed that a majority were either the Prusa i3 MK3 or the Creality Ender 3 line. This is worth noting because the most popular Prusa printer is the most expensive of their line while the most popular Creality printer is their most affordable printer. Given the popularity of these two models we have found that the question of Prusa vs Creality is almost synonymous with the question of Prusa i3 MK3 vs Ender 3. As a result we’ve broken down the price comparison of only these two specific lines below. 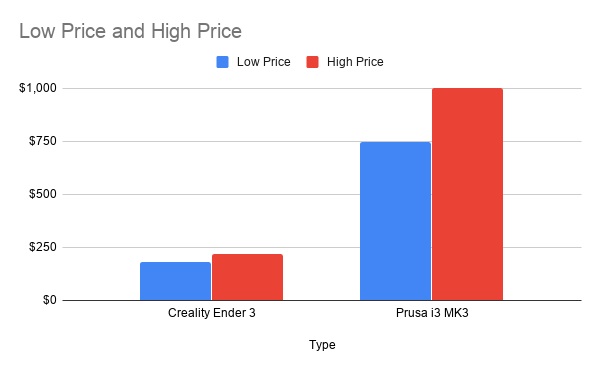 To be fair there are many other attributes that may differentiate the Prusa vs Ender 3, many of which we have not been able to explore in this study given the limits of the data we have available. These may include the final print quality, how long the printer lasts, and more. We hope to try to study some of these in future 3D printer reviews.

That being said, if your main concern is price, the question of Prusa vs Ender 3 has a clear winner, the Creality Ender 3 is the best 3D printer for you. If you save your money on the printer, then you can spend it instead on upgrades that make your life easier. Our totally biased opinion would be a Raspberry Pi, camera, and The Spaghetti Detective to watch your prints for you!